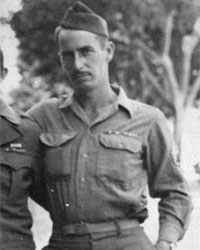 Award of the Bronze Star Medal
Staff Sergeant William Powers, Corps of Engineers, Company C, 284th Engineer Combat Battalion, United States Army, is awarded the Bronze Star Medal for heroic achievement in connection with military operations against an enemy of the United States at Belingries, Germany on 26 April 1945. While awaiting elimination of enemy observation in order to construct a bridge across the Altmuhl River. Sergeant Powers, a platoon sergeant, volunteered to assist in the evacuating of infantry casualties across the swift river. Under heavy enemy observed mortar fire, he and another man laid a guy-line across the swift river to facilitate crossings with two rafts and then courageously participated in the evacuation of casualties, which also included those hit during the operation. Sergeant Powers’ heroic actions reflect great credit on him and the armed forces of the United States.

Hitler poster signed by 1st Platoon and the Medics