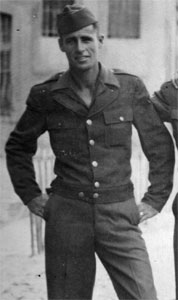 Award of the Bronze Star Medal
Sergeant Victor Barr, Corps of Engineers, Company C, 284th Engineer Combat Battalion, United States Army, is awarded the Bronze Star Medal for heroic achievement in connection with military operations against an enemy of the United States at Belingries, Germany on 26 April 1945. While awaiting elimination of enemy observation in order to construct a bridge across the Altmuhl River. Sergeant Barr, a squad leader, volunteered to assist in the evacuating of infantry casualties across the swift river. On his suggestion, a guy-line was laid across the swift river to facilitate crossings with two rafts. During construction of the line he was seriously wounded. Sergeant Barr's coolness under fire installed courage in the men of his unit, and his heroic actions reflect great credit on him and the armed forces of the United States.

Volunteered for and attended Ranger School